In which I bitch about my baby fat

It's summer and I have an infant. These are my top two excuses for not posting, in no particular order.

Marlo turned two months old on Tuesday. She has her 2 month check-up with the pediatrician later this afternoon - so I'll update you on her vitals soon. In my estimation she is about 12 pounds and 24 inches.

As for me, my weight loss has stalled a bit and that depresses me. Just in time to start losing all my hair and get really depressed, I suppose. I'm really rather vain, you see. I considered my pregnancy a success not because I gave birth to a beautiful healthy baby girl, but because I didn't get any stretch marks or varicose veins. I gained 41 pounds, and looking back at the three pictures of me pregnant in existence, I was pretty much big as a house. I'm short-waisted and small-boned, so even ten pounds around the middle gets pretty significant. As of my six week follow up with my OB, I had lost 25 pounds. Hurray, right? 25 pounds without any effort, just sitting through breastfeeding sessions eight times a day. Three weeks later, I stepped on the scale to discover I've lost...27 and a half pounds.

Now, hold on. I know what you're thinking. That's still almost a pound a week! That's still with no effort, other than breastfeeding eight times a day and not ever getting to eat because the baby won't nap! I know. It's still wonderful and can't really be considered stalling. I should be ashamed of myself. BUT the problem is that now it LOOKS like fat, and not like perfectly excusable pregnancy related weight. I'll get over myself, I promise. Feel free to slap me in the face next time you see me. My still-fat lookin' face.

And did I mention the size of my boobs? Well, lately? They're frightening. Especially if Marlo naps for a particularly long time (which does happen every once in a while - it's feast or famine with this girl) and I get a little engorged. They remind me of the death star. Especially when you see Marlo's head up against them. I am thinking about putting them on the kitchen scale to see how they are contributing to my weight retention - although since I don't have a pre-pregnancy boob weight to compare them to, it wouldn't really be very accurate. Still might be fun. Especially if I can take some SFW pictures of the process.

Here ya go, here's a picture of me with my fat face and giant boobs, eight weeks postpartum. Astute observers will note that I'm wearing the same dress I wore four weeks, um, prepartum? at my baby shower. Husband looks handsome, as usual. 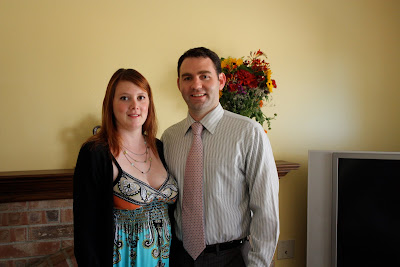 If you need a 4th picture to add to your pregnancy pictures I have one. :)
I think that dress is a keeper...

Losing weight after babies is a nightmare. My first one was no problem, and I got super cocky (and skinnier than I was pre-pregnancy). Cue the fifteen pounds of unloseable weight that accumulated after each subsequent pregnancy and left me forty-five pounds overweight. Losing THAT was no picnic, let me tell you. Stupid body.