How it all went down - Part one

WARNING: This post is long-winded and contains brief nudity and adult situations.

It's amazing the difference two weeks can make. It's almost like it never happened. Oh wait, except for the infant screaming from her nap chair. But seriously, the ability of the human brain to forget pain never ceases to amaze me. Because as of two weeks ago, I know a thing or two about pain. Or knew. Because I've already forgotten.

Let's see, where to begin.

Well, as previously reported in this space, my doctor and I were having a little difference of opinion over when I would be considered past due enough to warrant an induction. My doctor won because she is the doctor, and I was told that if I hadn't delivered by Friday the 28th I would be scheduled for an induction the following Tuesday. So I was left to home remedies to try and move things along. Husband and I took a few long walks and did some other stuff together, and by Tuesday night I was like "oh gah, I'm going to have to have sex again, aren't I?" but we were both very okay with skipping it and taking our chances.

Wednesday morning, the 26th, I woke up to pee around 4am. Or I thought that's what woke me up. But I was having contractions, and pretty substantial ones at that. I went back to bed and timed them for a while with my handy dandy iPhone app. They were coming about every seven minutes and lasting about 45 seconds to a minute apiece. When Mo got up to go to work, I told him it might be the day. I hoped it would be, because April 26 is Mo's birthday and I liked the idea that they would have the same-ish birthday. We agreed that he would go to work but come home at lunchtime or when I summonsed him, whichever came first. I stayed in bed, dozing, until about 11:45 - my last lazy day in bed ever I guess. But the contractions kept coming and keeping me out of any sort of real sleep.

Then suddenly, they lost intensity. A friend brought me lunch, my sister and Husband also showed up. Everyone was there to stare at me and I didn't seem to be in labor anymore. Mo decided to stay home anyway and get some rest in case things picked back up. We waited for a break in the rainy weather and went for a walk. We went down to the neighborhood school and walked around the track so we wouldn't get too far from home, just in case. All in all we walked about 2 1/2 miles. I was having contractions again while we were walking, but nothing too serious. We went home and Mo made some asparagus soup for dinner, and I remember that I laughed at its neon green color and thought how awful it would be if I threw it up during labor. We watched some TV and went to bed around 11.

It wasn't much past midnight when my eyes shot open again. The contractions were back with a gusto. I started timing them again around 1am and by 2:30 decided it was time to get Mo up and get the show on the road. 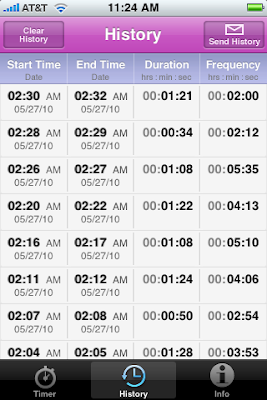 Those last two you see there, at the top -- those were doozies. At this point, I was having to hold on to furniture to get through them.

I had been absolutely dreading the car ride to the hospital - but it turned out to be not so bad. Considering that between our house and the hospital lies on of the worst-congested stretches of highway in the country, it was a good thing that I was in labor in the middle of the night. The whole trip only took about 15 minutes so I only had to suffer through about three contractions.

We got upstairs to Maternity Triage at Swedish First Hill at about 3:30am on the 27th. I curled up in the fetal position and whimpered through contractions while we waited for the nurse to check me. She came in and asked me my pain level, which I put at about a five. She asked me if I wanted to get pain meds or if I wanted to decide after she checked me, and I went for option B. When the next words out of her mouth were, "oh honey, you are a rock star," I knew I was in good shape. I was already six centimeters dilated, I forget how effaced. She told me she'd get me admitted and into the tub as soon as the on-call doctor signed off on my status. While I was waiting for him, my water broke in a huge gush. I remember being surprised at how warm and plentiful it was. It just kept coming. I also remember thinking "oh crap, this is about to get a whole lot worse now, isn't it?" Short answer: yes.

Well, the baby is hungry and my boobs are aching. Tune in next time for the exciting conclusion, including the absolute horrors of pushing and how I was convinced I was going to need 15 major surgeries to correct the damage done to my vagina but actually only needed a stitch or two.
Posted by Tori at 12:14 PM