How it all went down - Part three: Let's get this over with, already

All right, I'm sick and tired of not being done telling this story yet. So let's do it and be done.

By the time it was pushing time, I was more exhausted than I think I've ever been. Never mind the fact that the rumors are true - you really do go into some sort of crazy trance during labor. But I had basically gone through transition with a useless nurse and a husband who knows better than to tell me what to do in the best of circumstances. Meaning I had completely forgotten everything I had ever learned about managing the pain and had just gutted it out. I did everything wrong. I tensed up, arched my back, breathed too fast...you name it, I did it wrong.

Luckily I had Angel Nurse for that last half hour, who got me to focus and do it right. Feeling that little bit of control for even a little while helped me feel energized - or if not energized, like I wasn't going to pass out and die.

So pushing. Everybody glosses over pushing. You have these long, detailed discussions about early labor, active labor, transition, and then they just go  "pushing is good because you feel like you can actually do something. Okay, and then you deliver the placenta. The end." I am here to tell you that pushing is not that simple. It is not easy, nor is it fun. You spend the whole time thinking "really? You're sure that this is the baby? Cuz I think it might be a crap." I never felt relieved to be an active participant, I just felt pissed off that it was so hard to get that little baby head past my stupid pubic bone.

When I Monday Morning Quarterbacked the whole thing a few days later, I decided that pushing might have been easier/gone better if I had been a little more upright. I was essentially flat on my back. I had no intention of pushing flat on my back, because I paid attention in childbirth class and I knew that was the worst position to be in. It turns out, though, when you have slept for an hour and gone through several hours of intense contractions, you don't really have the energy to squat or even say out loud that you would like to sit up a little more because you're not really feeling the urge to push. I never got that super intense urge to bear down and I think it's because I was too flat.

It ended up taking me about an hour and a half. It's funny how you can be in a super intense situation like that and still have stupid little concerns in your head - like I remember noticing the doctor looked bored and worrying that I should be hurrying up. When I finally pushed Marlo out it was out of shear desperation. I just couldn't stand to push anymore. So I took a deep breath and I pushed as hard as I could...and then I swear I felt myself rip in half from front to back. I was convinced for that split second that I had completely ripped wide open and I had one ginormous gaping hole where all of my genitalia had formerly been. I honestly thought oh my god I don't need stitches I need surgery.

But that thought was short lived, because suddenly there was this gooey baby on my chest. Staring at me. Reaching her arms out toward me. Reflecting my expression back at me, I'm sure, one that said "what the EFF just happened?" I remember that I could feel her umbilical cord coming out of me, feel that she was still attached. 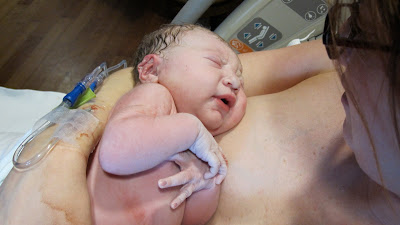 It's funny how quickly you forget everything else. I went from being a crying, whining, screaming floppy mess to sitting upright, bright and conversant in seconds flat. I had a small tear because Marlo came out with her hand to her face, but I barely noticed that I was being stitched up. We got to spend a good hour to ourselves, just me, Marlo and Husband, before we had any weighing or testing or eye dropping done and before we invited my family in. It was really one of the best hours of my life.

So, I did it. I had a baby. I had a baby naturally, no meds. I packed a whole big hospital bag full of iPods and tennis balls and other labor devices, and I didn't use a damn one of them. Was it as bad as I thought it would be? Just about. Would I do it again? Yes and no. It was definitely do-able. But next time I'm tempted to take a stack of Us Weekly's to the hospital and get my epidural right at 4 centimeters. It seems like a much more relaxing option.
Posted by Tori at 3:13 PM

I think you were VERY brave... but meds are good too :)

She is absolutely gorgeous! Congratulations!!!!!!!!!