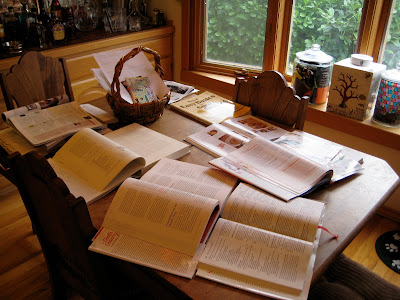 This is as far as my split pea soup project went this weekend. That is not to say, however, that I was not productive. I just changed projects midstream. 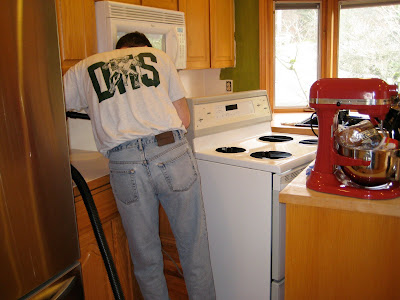 We decided to finally get the kitchen painted instead. Here is an action shot of Husband, vacuuming out the underbelly of the range. I would like to make a point of telling you that he does not regularly wear acid washed cK tapered leg jeans. These are his "work jeans," and any time he puts them on, I know that a project is going to get DONE.

I don't know if it's the nesting instinct kicking in, or just me getting older and more finicky, but I have never in my life been so excited about pulling a range out from the wall and scrubbing it down. I focused on that puppy like I'd taken a handful of Adderall. I also cleaned the top and back sides of the fridge, so long as we were pulling major appliances out from their spots and all. 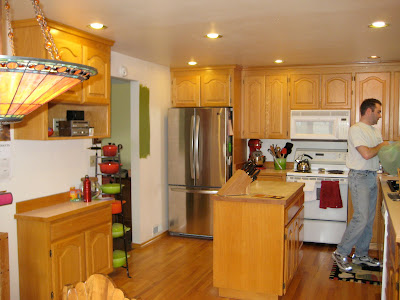 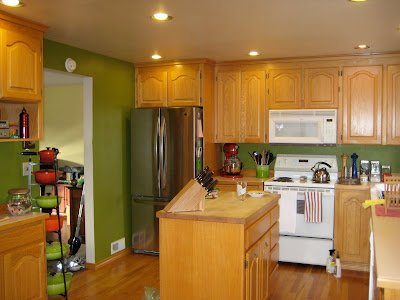 After!
(Good job picking up before taking the stupid photo, right?) 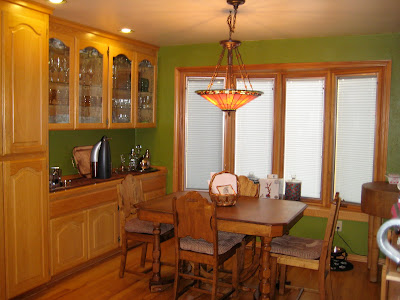 I love, love this color. I am a big fan of mossy greens. This one in particular is a Behr paint called Lucky Bamboo. I wanted to do something to perk up the wood, and I think that I did it. I can't say that this kitchen is really my taste, but I've been much happier since I decided to go with it's traditional vibe rather than fight it. It's cheaper that way, at the very least.

We (Husband) also painted the hall bathroom...but I'm not posting any pictures of that because I still HATE it. It looks like something straight out of 1982. I don't know what I can possibly do to fix it, short of ripping out the pink formica vanity with my bare hands.
Posted by Tori at 10:51 AM

The HH and I like it! Target has some nice "lucky bamboo" colored dish towels that would look nice hanging off your oven...

I thought I was bad because I have two!!