The Quick and Dirty 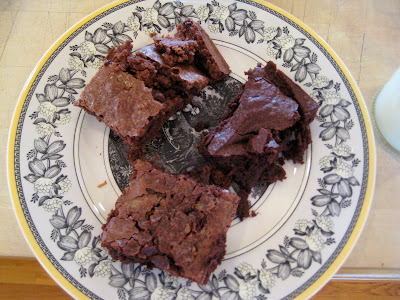 All right. I apologize for the delay. Before I lose the attention completely of the three people on Earth who actually care about the results of this taste test, I will give you my quick and dirty low down. My well written, publication worthy piece will have to wait for the end of round two.
The Betty Crocker Box Mix: The easiest to make by far (duh) and the texture most favored by tasters. These babies were eight minutes from box to oven. They had the pretty shiny top that everyone seems to appreciate, but I noticed if you touched the shiny top the sensation was not of hardened sugar like on creme brulee, but grease. These brownies are super greasy, which seems like chewiness overkill - they want to be so sure that the texture is ooey-gooey-chewy that they load up on the fats to excess.

My takeaway impression: ooey-gooey-chewy for sure, but also greasy and more sweet than chocolate.

The Mama's Minutia recipe: This one was the next easiest to make - I liked the stove top part of the process. I felt like I was making candy, and it was sort of like candy making - when the dough got shiny and balled up on itself, it was ready to go. These took about 20 minutes from start to oven, not too shabby for a from-scratch treat. I made them with unsweetened cocoa powder, and they were VERY chocolatey. Almost too chocolately. But in a good way. They were also very dense, and so their chewiness rivaled the box brownies, but they lacked the top sheen - surprising because the dough itself was very shiny going into the oven.

My takeaway impression: I really want to make these with dutch process cocoa and see how they turn out. Also, if you put half the pan in the freezer so you don't end up eating too many, but then you go and take one out of the freezer and eat it because you're out of fresh brownies? Heaven. I can't believe I've been eating brownies for thirty years and never knew they were better frozen. Thanks a lot to Deb of Smitten Kitchen for pointing this out (and also for posting the brownie recipe in the first place and starting this whole snowball rolling).

Cook's Illustrated recipe: As expected, this was the fussiest to prepare, but still really didn't take too long. About 25 minutes from start to oven. I must admit that because I am sort of immature and tend to rebel against overly authoritative instructions, I didn't follow this recipe to the letter. That makes me a bad scientist, and calls the validity of this whole exercise into question.

Here's what happened. I failed to find dutch process cocoa in any of three stores (since when is it so impossible to find?), but I did have some cocoa mix that was dutch processed cocoa plus sugar, which said you could use in the place of cocoa powder if you reduced the amount of sugar in the recipe proportionately. Fine, right? Well, I'm not so sure. These Cook's Illustrated brownies were SO CLOSE to perfect, I HAVE to make them over again with the correct ingredients and see what happens.

Except I am going to change one other little thing also...the recipe calls for two teaspoons of instant espresso. Two OPTIONAL teaspoons. That much espresso gave the brownies an almost bacon-y, smoky flavor that I can't say is really what I'm looking for in a brownie. I think when I make the next batch, I will reduce it to one teaspoon.

Oh, another fussy Cook's Illustrated thing I didn't do, but probably should have. They called for lining the pan with foil and removing the brownies after 10 minutes of cooling, so that the heat retained by the Pyrex pan wouldn't overcook them. I didn't go through the whole foil sling making process, because I didn't do it for any of the others and I was trying to make all things equal. The brownies did get a little overcooked, however, and the texture suffered. I can tell from the vast improvement in texture of the frozen version that the foil sling is an important measure.

My takeaway impression: Near perfect. I can't wait to remake the recipe with the right cocoa-to-sugar proportion and the reduced espresso powder. Frozen version almost impossible to resist.

Cooks Illustrated is too nerdy for me... although I do LOVE their mac & cheese recipe. All I have to say is WHERE ARE MY BROWNIES?

Lemon Bars are also WAY better fresh out of the freezer as well :)

Very interesting. I wish I could raid your freezer right now!